I have seen my first green flash 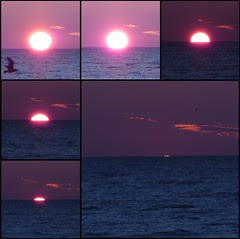 The green flash is real!
Originally uploaded by P^2
I saw my first green flash aboard the Norrøna north of Scotland at sunset 2008-08-20. I was of course too slow to photograph it, so I blog somebody else's photo. (Didn't even have time to call Knut jørgen.)
Posted by Jan Egil Kristiansen at 7:36 AM 3 comments:

We're in Norway from July 22 to August 19 2008. Our old Norwgian mobile numbers have been cancelled. The first day we can probably be reached on my mother's phone, +47 98064492. Will probably be in Trøndelag the first week of August.
Posted by Jan Egil Kristiansen at 9:49 AM No comments: 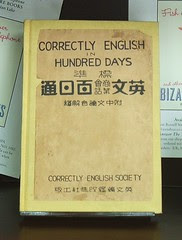 Posted by Jan Egil Kristiansen at 1:19 AM No comments:

My 'most interesting' photos 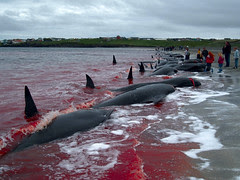 The Evergreen 747 is a 747 converted to fire fighting.

It's main force is the ability to land fully loaded with water. Thus, it doesn't have to dump the water when it returns, having failed to find the fire. Obviously an important scenario.

It's weakness is exposed in the following quote: "provided refilling options and landing zones are available". What is the practical capacity of the thing, if it has to transit to a 747 capable airport to refill the water tank?

Posted by Jan Egil Kristiansen at 1:53 AM No comments:

Stóra verkætlanin á bryggjuni í Havn shows a bridge that is closing the port to the yachts that are shown in the plan. The right end of that bridge lands in an area that is not very accessible to cars. The ancient city center, Tinganes, looking forest green? While the planned buildings are no more ugly than the existing ones, they seem to isolate the city from the sea about as badly as the existing anti-terror fence. Speaking of the fence - where is the anti-terror border planned here? Presently, we can check in to Norrøna outside the fence in Tórshavn, which is a blessing. Unlike Bergen, where you will be held captive in the 'safe' zone once you have checked in. (Rain or sun, a parking lot is not where you want to spend your last couple of hours in Bergen.)

There is a white triangle in the upper left corner of the image. One thing is for sure: There is nothing but sea there. My guess is that this is supposed to be the horizon - that whatever modeling software was used has to represent the horizon as if it is a specific place. You know, the edge that pre-Columbian sailors supposedly were afraid of. That is probably The End of the World in that upper left corner.
Posted by Jan Egil Kristiansen at 6:30 AM No comments:

Rounding the basalt cliffs into Hólmasund 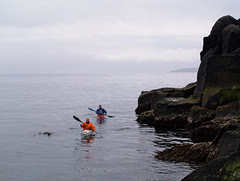 Back again today - with kayak rather than camera. Not quite as calm. At least 8 m/s northerly. Still nice.
Posted by Jan Egil Kristiansen at 1:41 PM No comments:

Björk and Sigur Rós plays a free concert to raise awareness on environmental issues. And Altantic Airways follows up by selling air tickets to the event. Well, there is of course no need to preach for the saved ones. By flying in, you prove that you really need to hear the message.
Posted by Jan Egil Kristiansen at 1:30 PM No comments: