Performance for a conscious audience. 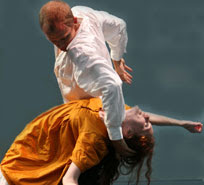 Normally I'm unconscious while watching a good show. Not in a medical or Freudian sense—in the sense that I do not think about where I am or where I look. My eyes are slaves to the plan of the director and the light designer, I see what they want me to see, look where they want me to.


Not so during the performance of Barbara. A live camera was projected on the screen and there was action at least two places on stage most of the time. I really had to stay 'awake' and look around to see most of the action. This was not a side effect of the camera, the non-camera part of the performance was designed in the same way.

I think I prefer slipping into unconsciousness in the audience. This was a worthwhile experiment, and maybe it's too early to be negative, but so far, I am. That said, they were really good at dancing with the camera. Once, with the camera on the floor, some heads were cut off, that's about it.

(But why was the contrast deliberately killed by projecting extra light on the screen?)